Garlic still not a magic pill
I reported recently (News Bite 12/12/06) on a study in Europe that showed that garlic supplementation had no effect on cholesterol levels. A group of researchers in Stanford, California have just released an even more compelling study that appears to confirm the earlier findings (Arch Intern Med 2007;167:346-353).

Improve your Cholesterol Score with Soy
I've written before about one of several nutritional studies on soy protein and its effect on LDL cholesterol (the bad stuff) and total cholesterol levels. A recent Canadian study in the American Journal of Clinical Nutrition (2006;83(2):244-51) theorized that isoflavones, a plant chemical with estrogen-like qualities, might be one of the significant factors in soy's association with reduced cholesterol levels. 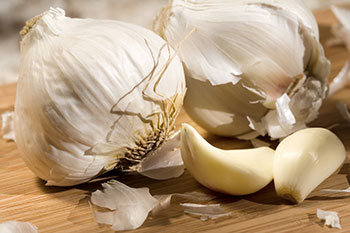 I've previously reported on the positive effects of garlic on lowering cholesterol and noted that it's hard to study garlic because of the characteristic smell and flavor. Worse, scientists have a hard time agreeing on what form of garlic to use (fresh? powder? pill?) and which strain of garlic to study. In vitro studies of garlic have identified certain sulfur-containing agents in garlic that appear to affect the inflammation markers of cardiovascular disease as well as blood cholesterol.

Researchers in the European Union just announced the results of a 12-week placebo-controlled study of the effects of garlic on various blood markers of cardiovascular disease (Am J Clin Nutr 2006;84(6):1324-9). The garlic used in the study was a garlic powder, in pill form, that had been specifically formulated to have high concentrations of the sulfur-containing compounds that appeared to be effective in the test tube.

They recruited 84 men and women who were otherwise healthy but were considered to be at risk for heart disease: they were between 40 and 75 years of age, overweight (Body Mass Index over 24.5), and smoked at least ten cigarettes a day. The subjects were randomly assigned to one of three groups: a placebo group, a garlic group, and an atorvastatin group. Atorvastatin is a medication marketed under the brand name Lipitor® and is used to treat high cholesterol and high triglyceride levels.

The subjects took their assigned study medications daily for twelve weeks and had their blood tested at weeks 4, 5, 11, and 12 (the end of the study). Compared with the placebo group, the garlic group saw slight increases in their inflammation markers (one of the signs of cardiovascular disease), while those given atorvastatin had 20% decreases in their inflammation markers. Nor did garlic have any effect on blood cholesterol levels, whether the scientists measured total cholesterol, HDL cholesterol (the good stuff), LDL cholesterol (the bad stuff), or triglycerides.

While it's now clear that garlic in pill form is not going to do anything for your cholesterol, in the fresh form it still tastes great, is low in calories (13 for 3 cloves), and has lots of Vitamin C. So if you like garlic, eat it! And if you're prescribed a cholesterol medication, take it as ordered.