Eat your antioxidants
People often rely on vitamin supplements to make up for their poor diets. This is especially true now that we know that some vitamins, such as antioxidants (vitamins E, C, or beta-carotene) or B vitamins, have been shown in the lab to help prevent such conditions as cancer, heart disease, and high cholesterol.

More Functional Food News
Recently I wrote about a cookie containing plant sterols that effectively improved cholesterol profiles in healthy, overweight volunteers. Researchers at the University of California at Davis recently reported the findings of a similar study they performed on the effectiveness of a plant-sterol-fortified orange drink.

Everybody Else Does It....
Peer pressure isn't just about school children pushing each other into smoking cigarettes or other risky behaviors. It works in eating, too - and even when those peers aren't peers, really, or even present.

But how does it taste? 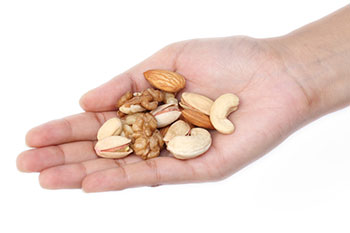 I've written several times recently about functional foods and how they can contribute to a healthier diet (Bites 11/08/06, 10/27/06). You might wonder, however, how good they actually taste. Researchers in the United Kingdom (Nutr J) noted that country's fondness for biscuits (in the United States: cookies) and attempted to design a functional food biscuit that would adhere to the following requirements:

After designing the biscuit (cookie) to match an existing biscuit and surpassing the hurdles presented by the need for commercial manufacture, they presented the biscuits to 25 university students of both sexes in a randomized crossover study. The students were asked to rate the cookies on a zero to 9 scale, with 0 meaning "dislike very much" and 9 meaning "like very much."

Both varieties scored substantially the same in taste tests, but the modified biscuit contained half the fat and salt, one-third the sugar, and 20% fewer calories than the original. Further, the modified cookie contained twice the fiber and almost 100% of the Recommended Daily Allowance of Vitamin C, B-6, B-12, and Folic Acid (the original cookie contained none of these vitamins).

It's really encouraging to see attention being paid to improving the health properties of popular foods like cookies. These aren't on the market yet, however. Until then, choose healthy snacks like carrots or apples - or even a handful of nuts - in place of those high-fat and high-calorie snack foods.