Breast Cancer and Calcium Supplements
Many doctors say that women would do well to take a calcium supplement containing vitamin d in order to help prevent bone loss. The science for the current recommendations of 1200 milligrams per day may not be great, but there is some. The proof for calcium and breast cancer, however, doesn't appear to be nearly as good. 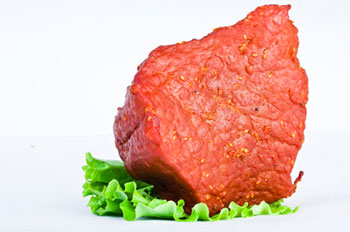 There have been links to an increased risk of cancer in those who eat higher amounts of red meat. So far this has not been shown in women with breast cancer, however. In a study published this week a group of researchers looked at a large number of women to determine if this might be the case (Arch Intern Med. 2006;166(20):2253-2259).

Dr. Eunyoung Cho and her colleagues reviewed data from the Nurses Health Study II and follow-up information on over 90,000 women. The initial results showed no correlation between eating red meat and breast cancer. When the researchers looked at women with cancers that were hormone receptor positive vs. those with negative hormone receptors the findings were much different.

In those with breast cancers showing positive hormone receptors there was a marked increase in cancer in those women consuming the most red meat. The researchers assessed intakes of total red meat including beef, pork, lamb as a sandwich or mixed dish, bacon, and hot dogs as well as other processed meats. The association held true when the measurement of red meat was in servings or by total weight consumed.

The scientists consider a number of theories about the higher risk for red meat eaters. Charring meat creates hetero-cyclic amines that can act as cancer promoting chemicals (see The Health of It All... Char-Grilling or Broiling Meat). The second consideration is that cattle in America has often been treated with hormones and that residual hormones might somehow have triggered the cancers in hormone receptor positive cases. Red meat is also a source of heme iron which has been shown to enhance hormone tumor function. Lastly, fat intake has been considered as a mechanism that raises steroid levels (although most research has not shown this to be the case).

Eating more red meat has been shown to increase the risk of heart disease and now appears linked to at least the hormone receptor positive type of breast cancer. The healthiest approach is to eat red meat and enjoy it, but limit yourself to about one serving of lean red meat per week.