Kids also eat more while watching TV
I wrote not long ago about how distractions such as music during a meal will contribute to adults eating more than they would without music on (News Bite, 11/07/06), and you've probably heard the estimates that children consume about 25% of their daily meals in front of the television. Recently, scientists at the University of Buffalo devised a pair of experiments to see if television viewing affected the amount children ate.

Why you eat more while watching TV
The theory is that watching television distracts you from paying attention to internal cues that tell you to stop eating. These cues are of two broad types: affective cues, which include the idea of "sensory specific satiety" (essentially, becoming bored with what you're eating), and interoceptive states such as hunger and fullness (no longer being hungry or simply feeling full).

Take a moment and eat less, even when you're hungry
So many factors outside of ourselves can influence what we eat, when, and how much. Just having snacks around can make you want to eat them (Bite, 9/18/13), and using larger plates or bowls can lead you to eat more, even if you know better (Bite, 10/06/06), the food isn't very good, or you're not even hungry. Worse yet, if you are hungry you're more likely to eat more and you're more likely to eat unhealthy food even when healthier options are available. 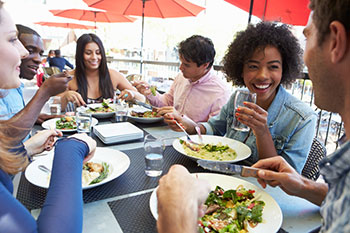 A lot of research has been done on environmental factors and their impact on people's eating behavior. Watching television, for example, has been positively related to increases in body fat and food intake along with decreases in exercise. The theory is that watching television distracts you from what you're eating, so you don't notice that you're full. Other studies have related listening to a recorded story to similar increases in food intake.

The subjects were carefully instructed in how to keep the diary and they recorded everything they ate and drank, including where, when, with whom, and how long they ate, as well as whether music was on or off during the meal. If music was on, they were asked to rate the music's speed on a 7-point scale, from slow to fast. Similarly they were to rate the music's volume on a 7-point scale, from soft to loud.

The students' Body Mass Index, height, weight, ethnicity, and other characteristics were recorded, as well.

While music speed and volume didn't seem to have any effect on what or how much the students ate, the students ate 20% more calories when music was on as opposed to when music was off. With music on, they ate 30% more fat, and their meal lasted an average of 30% longer. These results held true regardless of whether the individual student was overweight or not.

If you're trying to eat better and more healthy, it's critical for you to pay attention to what you eat. Turn off the music and the television and taste the food. After all, that's why you're eating it, isn't it?