Is sushi a high-cholesterol food?

I have recently had to change the way I cook because my fiancé has been diagnosed with very high levels of cholesterol. We do love sushi though, and as a treat we ordered out the other day. I assumed that certain types of sushi were high in cholesterol, but since we had done so well prior to the sushi, I thought he deserved a little treat.

I think I know the answer before I ask it, but some of the sushi we had was probably a bad choice. We ordered a red parrot roll that contains lobster tail tempura with asparagus, cream cheese, masago and spicy mayo layered with avocado, and fried shrimp tempura roll with spicy tuna on top. The concern is of course the cream cheese and mayo, and it being fried. Is it as bad as I think it is or can he have it as a treat if everything else he eats is cholesterol free? I don't want him to fall off when I am not around if he is feeling like I am depriving him. 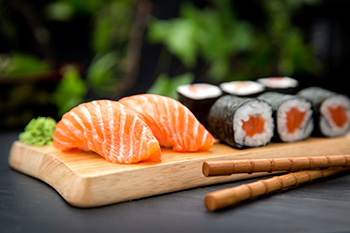 I also eat sushi and I do love it. Sushi can be really healthy, given that much of the fish served is high in monounsaturated fats and lower in cholesterol. There are a few things to keep in mind when you're ordering, however.

The first is that many sushi rolls on menus in America are not authentic Japanese recipes. This is, I believe, to cater to Western tastes that are generally heavier than are found in Japanese sushi bars. The sushi rolls you mention are examples where a healthy food has been corrupted by such things as cream cheese, creamy mustard, and fried shrimp.

If you want to have sushi, stick to nigiri, the small oblong mound of sushi rice topped with raw fish. Limit the number of sushi rolls that you order and stick to the more traditional Japanese style rolls without sauces, such as Tuna Roll (Tekkamaki) and Cucumber Roll (Kappamaki).

Another good choice for you is sashimi. This is the raw fish served without rice. This generally comes with a dipping sauce or is served with soy sauce.

This is the other area to be cautious of because the sauces can be very high in sodium. This is true of soy sauce, but the good news is that most restaurants will have low sodium soy sauce available to you on request (and the best restaurants will mix their own low-sodium soy sauce). There are other sauces that are also high in salt, and it's best to order them on the side, using them more sparingly than the sushi chef might. I will often eat my sushi without soy sauce (as it is unusual for a restaurant to have gluten-free tamari sauce) and it is amazing how well the flavors of the rice, fish, and wasabi come through where they are usually masked by the salty soy sauce.

Sushi can be great for you and is a perfect complement to any healthy diet.