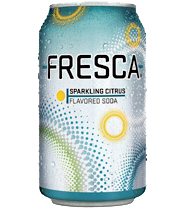 According to the Coca Cola Company, Fresca products have about 2 calories in an eight ounce serving. A can of Fresca is 12 ounces so 6 cans per day would be only 18 calories. While this is more than water, at zero calories, it is not significant. 18 calories is slightly more than a single teaspoon of sugar.

Of course we know that drinking sugar sweetened soft drinks causes weight gain and leads to an increase in the risk of diabetes. This is well established.

There's not a lot of research about whether drinking calorie free sodas will contribute to weight gain or not. What we do have is not encouraging for those who drink any type of soda, however. As part of the San Antonio Heart Study researchers in Texas looked at all soft drink consumption in a group followed for eight years (Scientific Sessions American Diabetic Association 2005 Abstract 1058-P). Of the 1,550 people who started the study, they looked at the 622 who were normal weight at the beginning.

The data showed that the more soft drinks of any kind that a person consumed, the more likely they were to be overweight or obese. The risk is actually pretty high. For each can per day of soda (on average) the risk of obesity is increased by 41%.

The table below is an easy way to look at their findings. The numbers represent the percentage chance of being overweight or obese depending on the type of soft drink consumed. For instance, 54% of those drinking 1 to 2 cans per day of diet drinks had become overweight during the eight years of the study.

While I am not a fan of automatically interpreting studies in animals as applying to humans, there is an interesting study where researchers at Purdue showed that rats fed artificially sweetened juices were more likely to eat more calories when presented with "regular" food (Int J Obesity 2004; 28(7):933-935). Their feeling is that the manipulation of sweet tastes reduced the natural ability of the rats to use sweet taste to judge the caloric content of snack they were given.

Keep in mind that humans are not rats (although we do react in similar ways to food). Whether drinking more sugar free sodas impairs the ability of humans to judge other food consumption has not been shown. There are studies, however, that show people who consume more artificial sweeteners tend to gain more weight.

Keep in mind that such studies as these don't prove that consuming diet drinks or artificial sweeteners causes weight gain - it simply shows that there is a link.

What this means for you: I am not a fan of diet soft drinks and don't recommend them to my patients. Drink water. We know tea, green tea and coffee are good for you and even cocoa is a good choice. While diet sodas do have about the same calories as water, I don't feel that we have enough information to say that they are as good for you as water. Research such as that noted above is enough to make me consider that they might impair the ability to make good choices about other foods.